The IAM has been helping organizations understand and develop their asset management capability since 1994.  From the beginning, it was recognized that learning and applying the concepts and practices would always be a journey of progressive improvement, both for individual people and for whole organizations. In such early days, it was not clear what good asset management looked like.

This is, of course, still an ongoing story.  However, international collaboration, and the development of standards has given a clearer understanding of what good asset management looks like in different environments.

However, there is increasing demand for guidance that goes beyond the minimum requirements and merely competent practices.  In particular, how to identify, recognize and define what are best practices – and how should this take account of the context of the organization, with its unique combination of assets and operating environment.

Our latest documents describe the characteristics of good and great organizations and how such capabilities and maturity might be recognized.  The materials are also designed to help you make the business case for improving asset management in your organization. 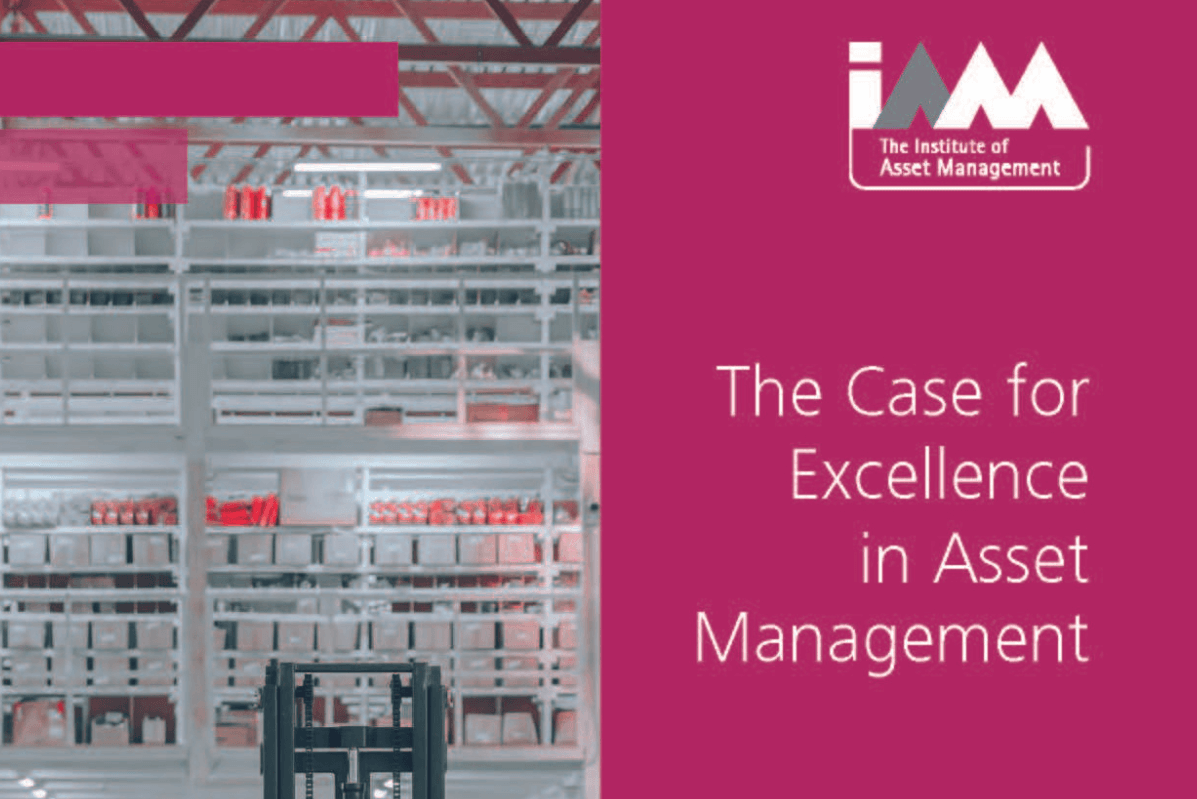 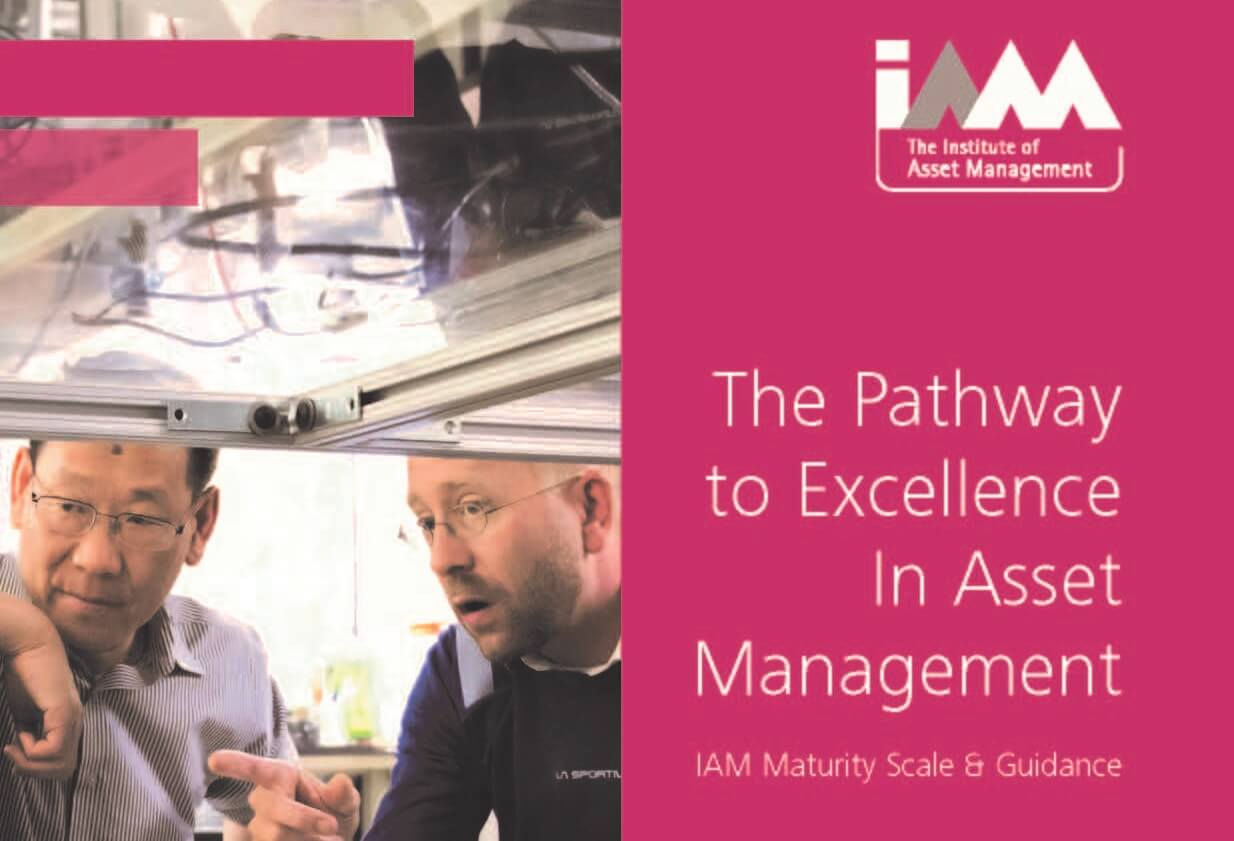 The story so far…

Also in 2008, the IAM issued the toolkit, comprising PAS55, the Self-Assessment Methodology (SAM, since improved to SAM+) and the Competences Framework.  The IAM Endorsed Assessor scheme was opened in 2010 and there is much useful information about auditing stages up to full conformance with ISO 550001, aligned with Stage 3 in the Maturity Scale below.

The 55000 series of standards is being revised and extended currently by ISO’s Technical Committee TC251, with updates due to be released in 2023.  The GFMAM Landscape is also being revised currently.

The Landscape and ISO 55000 are quite different.

The Landscape provides an overview of the discipline of asset management (and several other purposes described in the document).  The IAM Anatomy expands significantly on the Landscape and each of the 39 Subjects.

ISO 55001 is a requirements specification for a management system (the scheme of direction, coordination, control, operational management and continual improvement).   So, while such a management system is extremely valuable for ensuring good asset management, it only covers the ‘must always do’ elements and their relationships or interdependencies.

The wider field (Landscape/Anatomy) of asset management considers a much wider range of topics, enablers and interfaces, which may have different relevance and significance to organizations in varied environments.

By definition, an organisation that conforms to the requirements of a management system standard is competent. However, the journey to excellence will include many other considerations, constraints and opportunities, including how far to improve the management system itself. Figure 1 (or the ‘onion rings’ diagram) in 55000 is a useful way of illustrating the relationship. 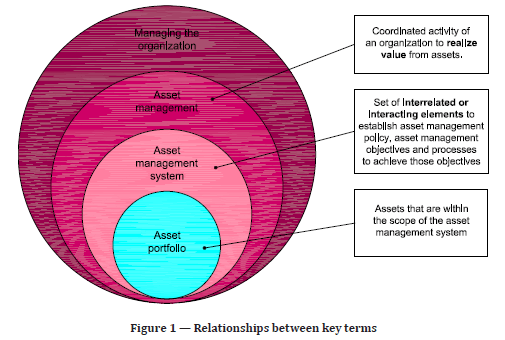 We have considered how best to distinguish between maturity and excellence and how these terms or concepts relate together.  Our conclusions are that excellence should be used in the familiar sense to represent outstanding i.e. significantly better, or reaching the upper limits of what is possible (in terms of performance, capability etc).  And, to avoid confusion, we are therefore using the term maturity to describe the whole spectrum and progress through various stages.   So, maturity recognises the position on a scale of achievement, as part of an ongoing journey.  The IAM maturity guidance includes the 0-5 scale that has been developed to support consistent recognition of levels of maturity.

Many sectors use such maturity scales to reflect their view of developing capabilities and performance.  The IAM scale (shown above) shows how organizations that are improving their asset management go through awareness and developing stages of their joined-up competency and are thereafter able to exploit these capabilities (optimizing) to their limits of worthwhile refinement (excellence).

We have worked with the Global Forum for Maintenance and Asset Management (GFMAM) for years in the subtleties and practicalities of identifying and assessing maturity.  The GFMAM has recently published the 2nd Edition of its maturity documents (https://gfmam.org/publications).

Maturity Scale and Guidance: The Pathway to Excellence in Asset Management

The IAM has published its revised Maturity Scale and Guidance: The Pathway to Excellence in Asset Management,

The material in this guide is the cumulative product of several IAM studies of the subject over the last 15 years.  It continues, of course, to be an evolving story.  The subject of asset management and the characteristics of adequacy, good or best practice are continually changing through process innovations, new technology and learning. There are also widely different operational environments, constraints, cultures and opportunities in asset management.  In particular, what should be recognized as excellent needs to consider the context of the organization and how this changes; levels of sophistication, refinement and optimization that are worthwhile and possible in one environment may not represent either a possibility or a worthwhile investment in another.  The revised guidance addresses this context-dependence and provides insights for recognizing what asset management excellence might represent to an organization within a particular context. 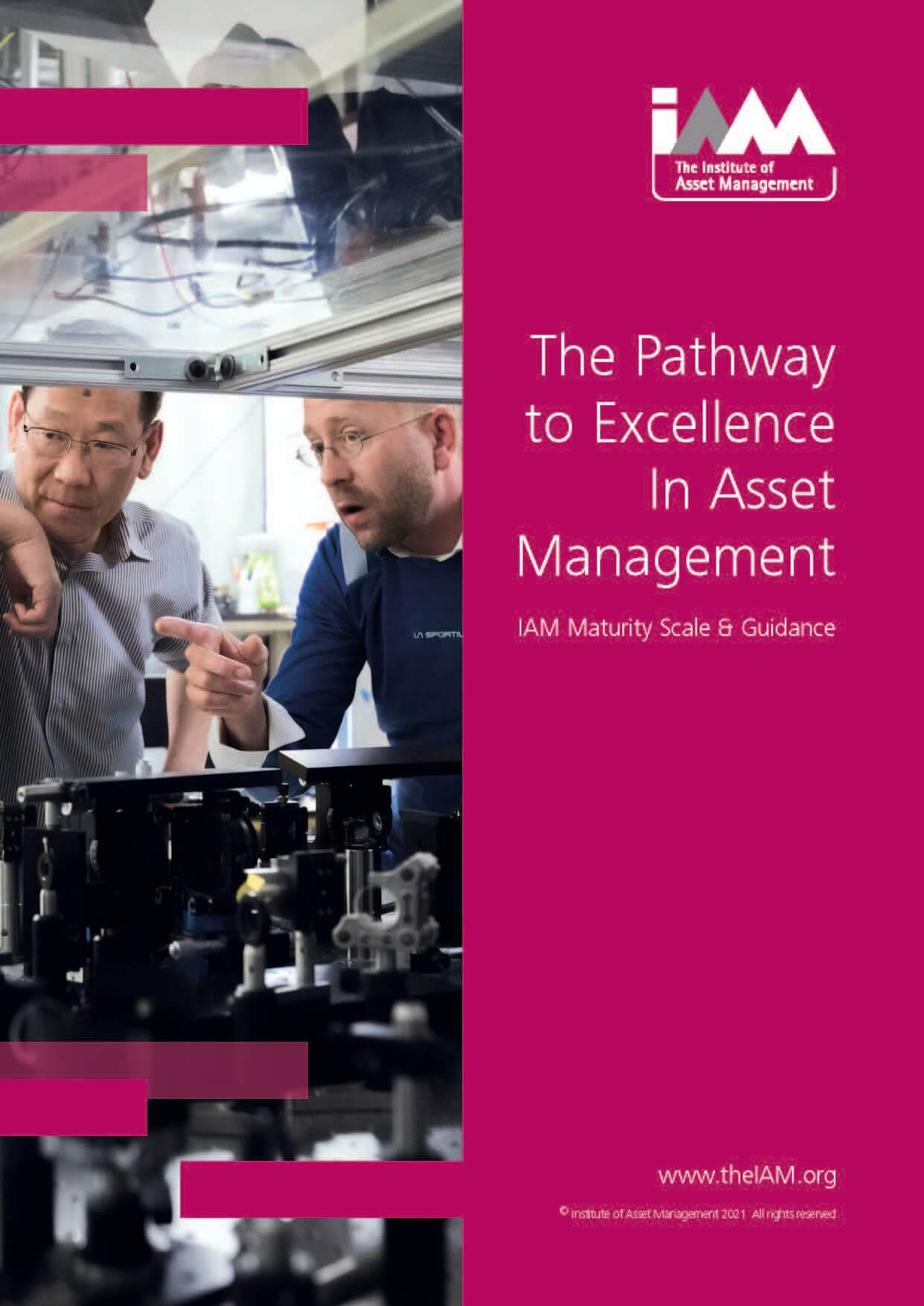 Our long-established 6-box conceptual model is aligned to the GFMAM Landscape groupings of the 39 Subjects. This will continue to be relevant and the best model for organizations beginning their journey or progressing to maturity level 3 (competent).  Such maturity also equates to the establishment of an effective asset management system that conforms with the requirements of ISO 55001. 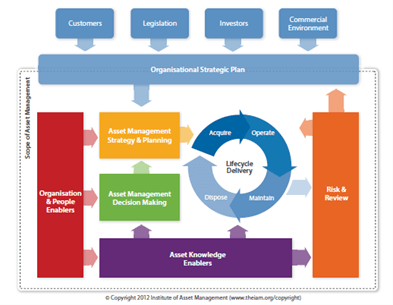 Beyond this maturity level, however, additional considerations become increasingly important.   To build on the benefits of a joined-up, life cycle, risk-based asset management system, there is generally great scope for improving culture, leadership, optimized decision-making, collaborative behaviours, governance and linkages to the evident realization of value.  The IAM has therefore develop an expanded 10-box model to ensure that higher levels of maturity consider such added value dimensions.  The additional groupings provide focus on Purpose & Context, Leadership & Governance, Risk Management (separating from the Review and Continual Improvement areas) and delivery of Value & Outcomes.   And the central circle of asset life cycle delivery is more organic, recognising the need for tighter integration and overlapping responsibilities. 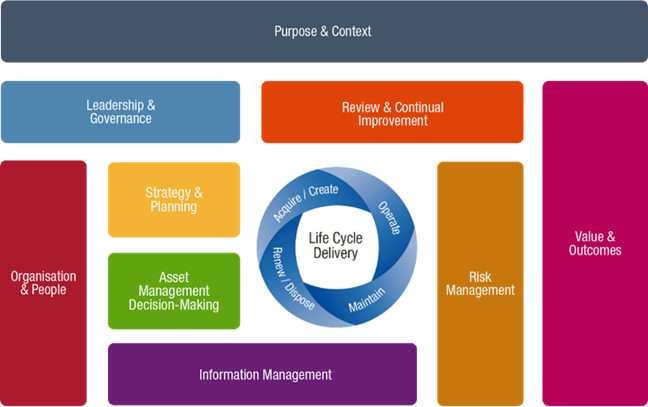 You may also notice small changes in terminology (e.g. information management instead of just asset knowledge) and arrows have been removed (since it is impossible to show all the flows and inter-relationships without causing confusion).

We recommend you read the pathway document to understand all the detail and consequences.  We expect that, in line with worldwide developments and understanding of the discipline, the 10-box model may evolve further.

If you wish to contribute or comment, why not join the conversation

Login to join the discussion

The Case for Excellence in Asset Management

In addition to the updated guidance document, we have prepared a short paper that outlines the Case for Excellence.  This is aimed at helping organizations to justify their ongoing efforts in raising their maturity beyond the merely competent – and realize the great value of striving for excellence.

The need for, and benefits from, excellence in asset management have never been stronger. Our society and organizations rely on increasingly complex, critical asset systems and we face ever-greater demands, uncertainties, constraints and new opportunities.

We increasingly need real excellence in their management if we are to meet current and future needs, especially in the context of net zero.

The Case for Excellence sets out the case for developing and maintaining excellence in asset management, and what the IAM is doing to help.  You may find this helpful in explaining the opportunity to colleagues.

Assessing the higher levels of maturity could never be a tick box procedure, with generic criteria and multiple-choice symptoms.   It is a more subtle and challenging process, requiring great skill and experience in the assessor to recognize (in the organization’s context) what is achievable, what is worthwhile, and the degree to which this is evident.  To make such judgements, the assessor needs to have extensive knowledge of the relevant sector, leading edge practices, constraints and value criteria that may be used by different organizations.

The IAM is preparing an extension to its well-respected and widely used Endorsed Assessor Scheme to recognize and endorse individual assessors who are capable of assessing asset management excellence.

Do you want to be involved in our work?

As public projects and events become available, they will be listed below. You can register your interest at any time by emailing Office@theIAM.org and we will contact you with more information when projects are released. 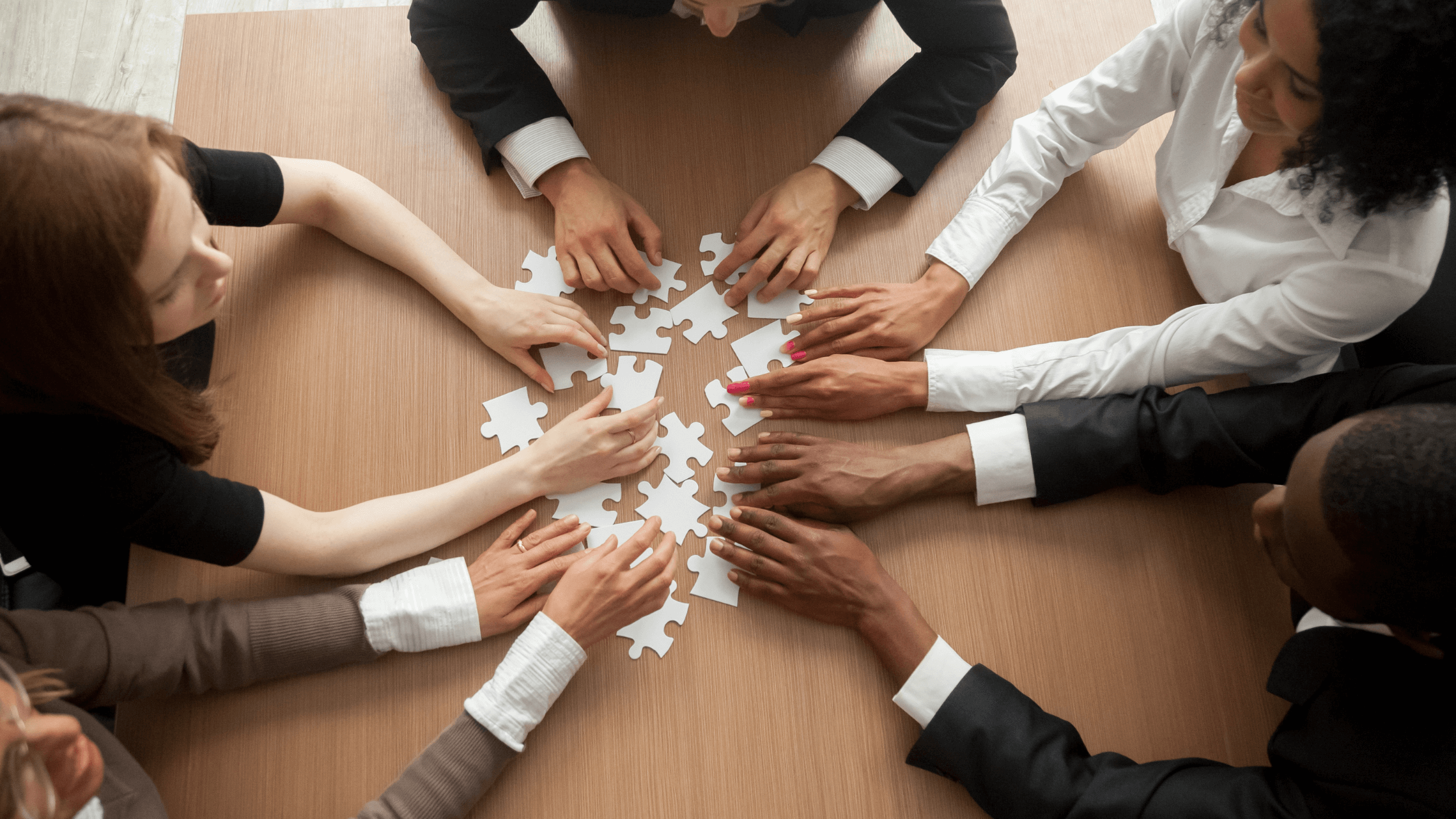